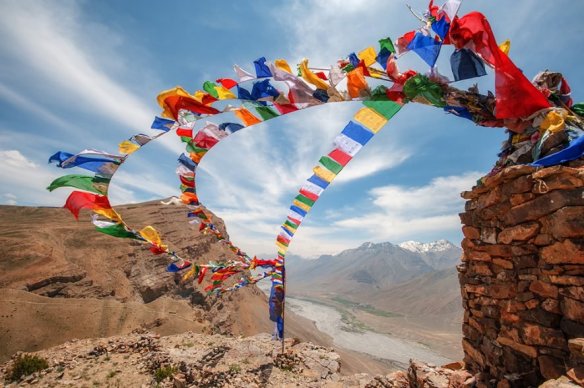 I have recently discovered prayer flags and the ways quilters and fiber artists are making and using them to carry a message, oftentimes of hopes for peace and prayers of comfort.

The Prayer Flag Project was started by Vivika Hansen DeNegre when she invited people from around the world to join her in making prayer flags. According to the project notes: “Each flag is created in the artists own style, then hung outside for a while, its words and sentiment dissolving into the wind and being spread to all whom the wind touches. They are a living, breathing, kinetic journal of our hopes, dreams and concerns. You can read more about the Prayer Flag project at http://www.theprayerflagproject.blogspot.com and join, if you wish.

Prayer flags come from mainly a Buddhist tradition, and according to Wikipedia: “Traditionally, prayer flags are used to promote peace, compassion, strength, and wisdom. The flags do not carry prayers to gods, which is a common misconception; rather, the Tibetans believe the prayers and mantras will be blown by the wind to spread the good will and compassion into all pervading space. Therefore, prayer flags are thought to bring benefit to all.” The traditional colors for these flags are flown in order, with blue on the left for space, white for air, red for fire, green for water, and yellow for earth, symbolizing the five elements.

Prayer flags have been made, for example, at a very personal level, as comfort for a friend going through cancer treatment, or on a more public level in response to a tragedy such as in memory of the victims of the Boston Marathon bombing. Each prayer flag is unique and is a reflection of the intention of its maker.

You can make a prayer flag in whatever shape and form you wish. In the beginning, the first call for prayer flags being submitted for a specific cause had the following guidelines: Using materials of your choice, start with a 5″ x 11″ piece of fabric, turn down the top 3″ for a hanging sleeve. Choose a theme for your flag. Sign and date it. You can make a string of prayer flags for your house or garden, to give to a special person, or participate in a special prayer flag project and contribute your flag to be used in a larger flag exhibit.

A miniature flag project is recommended as a way for members of a group to celebrate special events or help provide support in sadder times, with each member making a string of five miniature flags with a special theme. The miniature flags can also be displayed in a picture frame.

I am excited about all the possibilities for making prayer flags, and hope to have my own first string of prayer flags hanging in my garden, before summer’s end. 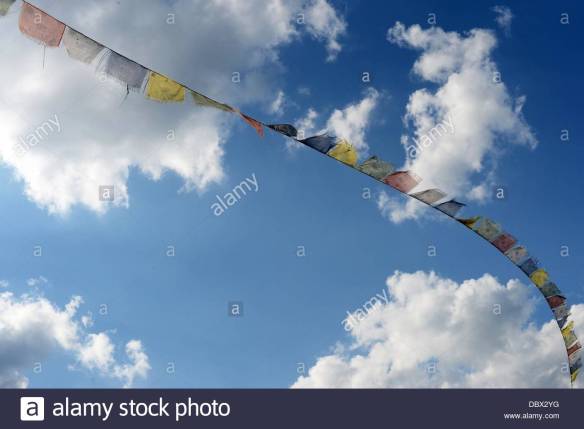 American quilters (Bobbi Fitzsimmons and Connie Moser completed the first of three Nepal Tiger Quilts at home in North Carolina (April 2017). The quilt squares were made by women in Nepal and sent to the U.S. to be assembled into quilts.

I have only just become aware of The Advocacy Project. Their work is described on their website at http://www.advocacynet.org :

Quilts can tell a powerful story. One of the ways The Advocacy Project supports community-based campaigns in other countries is to help them produce and use quilts in their advocacy. This was inspired by Bosnian weavers from BOSFAM, who lost relatives in the 1995 Srebrenica massacre. In 2006, with help from The Advocacy Project, the weavers produced woven squares that carried the names of their murdered family members. This became the first of 15 Srebrenica Memorial Quilts.

Three years later, in 2009, women from the Guatemalan community of Rio Negro followed the example of the BOSFAM weavers and produced a rich quilt which carried the names of family members who had died in the Rio Negro massacres in 1982. They were helped by Peace Fellow Heidi McKinnon, an accomplished art museum curator.

Both groups of women, in Bosnia and Guatemala, had been deeply wounded by war, and both found quilting to be deeply therapeutic. Quilting also allowed them to speak out, develop skills, and produce works of art that keep their culture alive.

This formula has proved enormously appealing for women who have faced discrimination and most of the communities that have partnered with the Advocacy Project have produced at least one advocacy quilt. Women from Uganda even made a quilt from recycled straws to publicize the threat to their environment.

Because their aim was to be heard, every artist who has contributed a quilt square is profiled on the Advocacy Project website. They number almost five hundred and each has a story to tell. Some – as in Mali, where rape is a cause of great stigma – have asked that their true identify be withheld. But the majority has insisted that they be identified. This is their way of denouncing the crime that was committed against them.

In the process of assembling the quilts, many of our American quilters have come to understand the violence suffered by the artists and been shocked by what they have learned. After working on the Ahadi quilts from the Congo Beth Bohac, from the Faithful Circle Quilters of Columbia, MD, observed: “There are women in this world who suffer so much that we cannot even imagine.”

Between 2010 and 2016 our main goal was to tell a story and if these quilts speak, people have certainly listened. Over 80,000 people visited an exhibition of our quilts at the United Nations in New York in 2012, including the current Foreign Minister of Sweden. Thousands more were able to catch our exhibition of 24 quilts at Kean University in 2013. In November 2013 the renowned Textile Museum in Washington put on a splendid display of eight quilts – the last exhibit at its location.

Here is a picture of the Ahadi (Promise) Quilt being assembled in the U.S.

There is much to see on this site. If you wish to read about the individual projects, click on the link at the bottom of the page that says QUILTS. The page that comes up has the title ADVOCACY QUILTS and below that, WOMEN. There you can click on each project to read the profile of each woman who contributed to these quilts.

I have been on hiatus…it’s complicated…lol…but new things have been happening in my quilting world, and I am being prompted to share them.    I am now in three quilting mini groups:   “Loose Threads”, was started in 1996 and has met monthly, since then.  We usually make one group quilt a year that we donate to AVQA, our local quilt guild, for their yearly show auction.   This year, we made a bunny quilt for the auction.

A new group I have joined is the “Creative Art Quilters”. We meet monthly and each month a member of our group demonstrates an art quilting technique. We also each made one or two blocks for an auction quilt for our guild, and had enough blocks that we ended up making two quilts. Our theme was the “Antelope Valley” where we live. 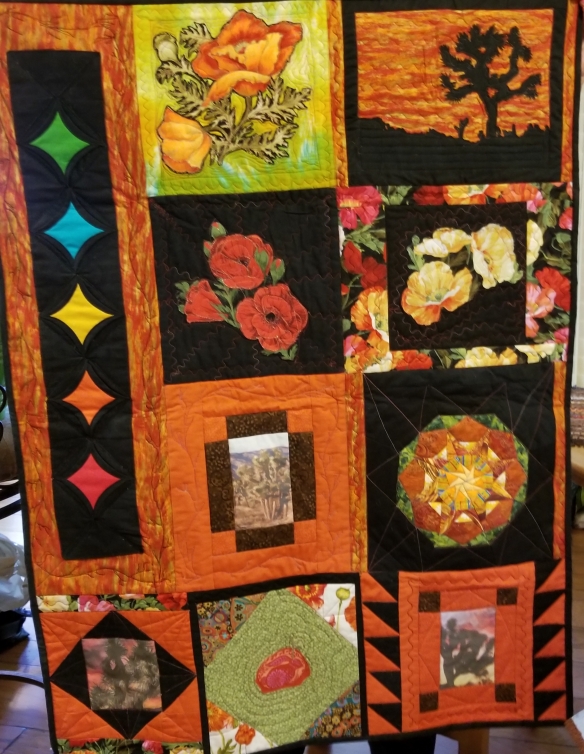 All three quilts brought in over $100 each at the auction, so we were pleased that our efforts brought in money for the guild.

Prior to our AVQA show, our guild had a Challenge Quilt event, and I was one of three winners with my B-21 quilt. The theme was what we liked most about living in the Antelope Valley. Edwards Air Force Base is in our area, and I often get to watch the B-2 (Stealth) bomber fly over my house. A new one being built is the B-21, so I am looking forward to its completion. My quilt shows the
new B-21 flying over our local poppy fields, which I also love.

Another group I have joined is “BYOP” (Bring Your Own Project). We meet bimonthly to work on our own quilting projects. We also travel to quilt shows and participate in the annual Southern California quilt run. 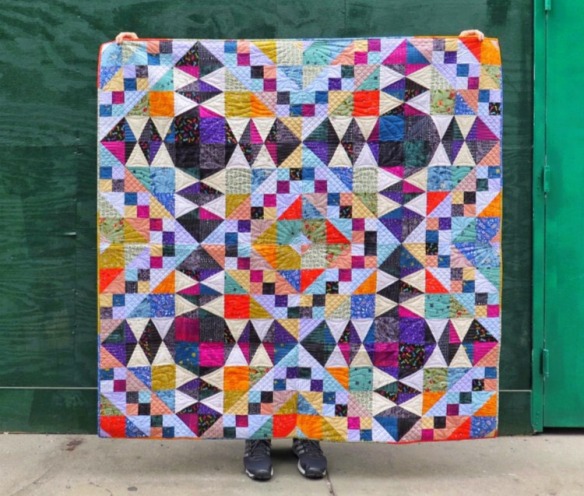 If seen, please notify me at karenstenback@gmail.com

My AVQA Quilt Guild brought Marguerette Tate (the owl, zebra quilt lady) back for another workshop on her beautiful flower quilts.  They are absolutely stunning, in person.  Here are some of the samples Marguerette brought for us.   She had kits made up, and it was really difficult to choose just one! 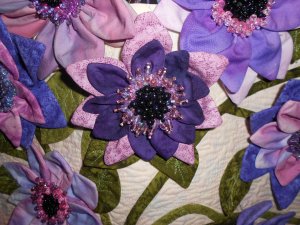 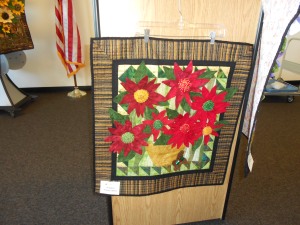 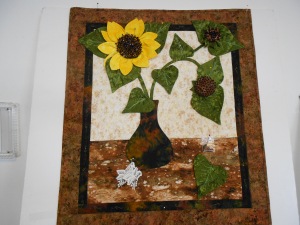 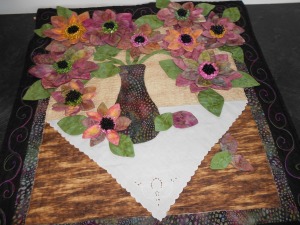 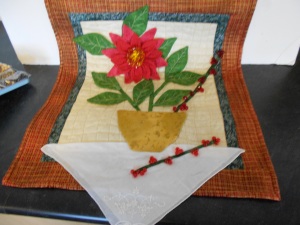 We all tried our hand at making the beaded flowers and seed pods.  Here are some of our results: 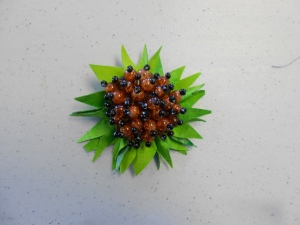 Here are some close-ups of her beaded flowers:

You can click on each pic for a closer view.

This was another inspiring class by Marguerette.  Again, Marguerette can be reached at:   (909) 794-9357, or mandmcreations@dslextreme.com .     And if you hadn’t noticed, two of us won ‘best in our class’ ribbons in our recent show for quilts we made using Marguerette’s techniques (see my earlier blog on the animal workshop with Marguerette) for the owl and zebra quilts.   She is amazing!

Here is one class member wearing her seed pod as a fancy accent to her outfit!  Such fun! 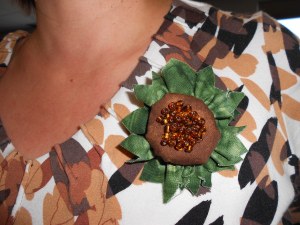 My AVQA Quilt Guild’s annual show in Lancaster, California, just closed.  It was a great show!  I am posting pictures of some of the winning quilts, below, but the first picture is of the winner of my fundraiser quilt for Halfway to Home dog rescue.  On the left is Beverly of Halfway to Home; on the right is my friend, Sue, who won the quilt.

Here are some winning quilts from the show: 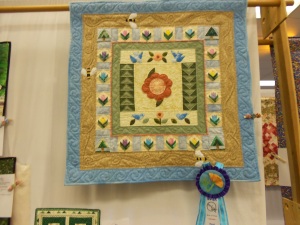 My Dakota Quilt by Barbara Zamora-Athy 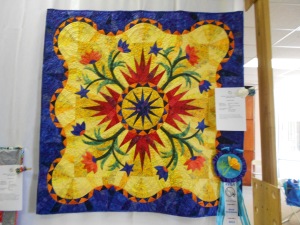 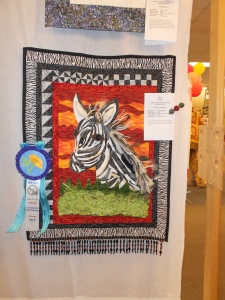 This beautiful quilt by Sue Jacobsen, featured in one of my earlier blogs, won four ribbons, including Best of Show and Viewer’s Choice. It is hand appliqued and hand quilted.

Again – it was a Great show!

I have two Passions - Quilting and Health and Wellness. I Love Quilting, and want to take care of my health so I can continue with all things 'quilty' until the end. I will be talking about how to get and stay healthy, and also share my quilting journey.